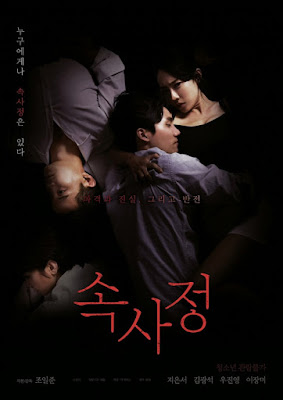 One day, a woman (Lee Soo-yeon) goes to a police station and claims she's confessing to a murder. The more surprising this is, she claims to be his wife. The police goes to the scene of the crime and sees a man (Choi Joo-hyeok) stabbed to death. Her husband is a well-known entrepreneur but he is found miserably dead.

Soo-yeon's story is shocking.
Her husband was the Devil himself. He treated his wife as a sexual plaything and even dared to covet her sister (Lee Ji-yeon).

The police can't help but be surprised at the shocking things Soo-yeon tells them and the investigation seems to be coming to an end. However, Gi-cheol feels uncomfortable every time a piece of truth is revealed; the whereabouts of Soo-yeon's sister and the directors of the husband's company all seem strange.
Despite the fact that the chief keeps telling him to wrap up the case, Gi-cheol continues to investigate. Then, news of Ji-yeon's suicide comes up and a recorded file of her will is found.
The case becomes more and more complicated while Gi-cheol and Soo-yeon also become complicated.