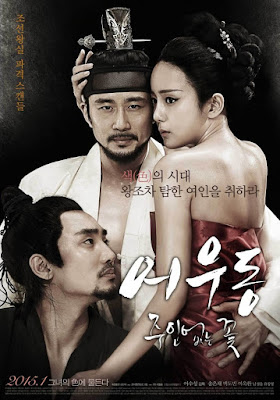 A triangular relationship between Eo Woo-dong, her husband Lee Dong, and fantasy character Moo-gong, highlights on the first half of the Joseon Dynasty and portrays the contradicted life of the high class people, criticizing the modern day Korean society.
Eo Woo-dong was a Korean dancer, writer, artist, and poet from a noble family (Park) in the Joseon Dynasty of the 15th century. Most of her work has not been preserved. Uhwudong was from was a noble family of the Joseon Dynasty. She married Yidong, prince Taegang, the great grandson of Joseon Taejong. She was forced to divorce him on account of adultery charges and subsequently she became an active poet, writer, artist, and dancer. She was noted for her exceptional beauty, dancing, singing talent, poetry, quick wit and charm, and extraordinary intellect. Her personal life has become almost myth-like, having inspired novels, movies, TV series, operas, and numerous poets. She was reinstated by after the destruction of the Joseon Dynasty. After the destruction of the Joseon Dynasty in 1910, due to her renowned assertive and independent nature, she has become a modern popular cultural icon of Korea.