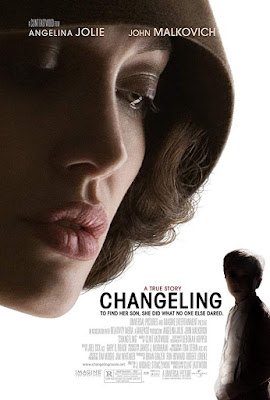 
Los Angeles, 1928. Single mother Christine Collins (Angelina Jolie) returns from work to find her nine-year-old son Walter (Gattlin Griffith) gone. She calls the L.A.P.D. to initiate a search. Five months later, a boy is found in Illinois who fits the description, and he says he's her son. To fanfare and photos, the L.A.P.D. reunite mother and son, but she insists he's not her boy. The cops dismiss her as either a liar or hysterical. When she joins a minister in his public criticism of the Police, they in turn use government power to silence and intimidate her. Meanwhile, a cop goes to a dilapidated ranch to find a Canadian lad who's without legal status; the youth tells a grisly tale. There's redress for murder; is there redress for abuse of power?