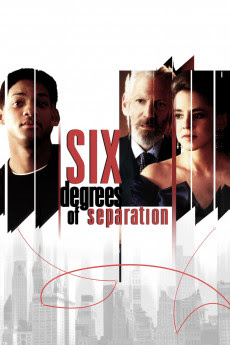 New Yorkers Ouisa and Flan Kittredge are upper-class private art dealers, pretentious, but compassionate. Their prized possession is a double-sided Kandinsky: one side represents control; the other, chaos. They relay a story to their friends and acquaintances that becomes legendary over time: their encounter with a young black stranger who came stumbling upon their front door one evening as they were courting Geoffrey Miller, an important investor who could make them wealthy beyond their dreams. The young man, Paul Poitier, had just arrived in the city when he was mugged outside their building, he sported a minor knife wound to the abdomen. He was a friend of the Kittredges' children, who are attending Harvard; more importantly, he's the son of actor and Director Sidney Poitier. Tomorrow, Paul is meeting up with his father, who is in town directing a movie of "Cats". Beyond the attraction of talking Paul into getting them roles in the movie, Ouisa, Flan, and Geoffrey all end up being ...